Skip to content
You are here
Home > General >
8
There is something about sitting around in a close huddle and swapping stories that makes people bond together like nothing else does. 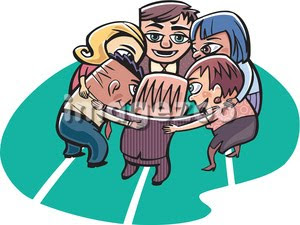 Long ago, when I used to literally shiver at the thought of going up to a stage and speaking in front of an audience, someone wise had given me a golden piece of advice: “Pretend & act that you are confident – and soon you will start feeling that way”. “Wasn’t it supposed to be the other way round?” I wondered. “You feel confident first – because of which you are able to act that way”. But the all-consuming panic and stage fright quickly ensured that I followed the one path to survival shown to me. And wonder of wonders – it worked!! That was one trick I have used over and over and over again all through my growing years and in my professional life too!

The same thought came rushing to me again: “Pretend / Act a certain way – and soon you start feeling the same way too!”. Only this time, the scenario was different. In front of me was a group of senior managers of an MNC bank. We had just finished doing many exercises using the Myer-Brigg Type Indicator (MBTI). The idea was to highlight how – below our apparent similarities, each one of us is so uniquely different as a human being, in the way we perceive the world and make our decisions around it. The day had proceeded better than expected – and the fact that the group had reached the realization of the differences was palpable. The key question now for me as a Facilitator was to now move them back in the opposite direction: “How do I get them to come together again, with the new appreciation of how unique they were individually – and yet how similar they were in many ways that wove them together as a team. How could I make them see that together they created a unique mosaic, which is so uniquely “them” as a team?”.

This is when the learning of many years came rushing to me: “To get a group of people feel like a close team, get them to pretend / act they are already a close knit team, sitting in a huddle, swapping stories about each other”.

But sometimes with people, it is not as easy to get them to drop their defenses. Years of competitive corporate life, sometimes makes one believe that showing your real self somehow exposes you and makes you more vulnerable to the office politics. “How do we get around this deep seated psyche?”. There is a popular concept in football called a “head-fake”. The footballer moves his head in one direction, when he actually intends going in the other direction. We needed a head-fake.

The head-fake for us came in the form of PLAY. The one thing that makes people let their guards down, other than small children is the act of playing. “Nothing serious, we are just playing”!…. Oh yes, that really works!

We soon had all 10 senior managers take up colors and markers and unleash their creativity in drawing a tree – complete with roots, leaves, buds, thorns, trunk, birds around…. Well, the only restriction they had was their own imagination. And then, we made a creative leap…. “Just imagine that the tree you have drawn is your personality tree and each component there represents something in your personality – for ex. The trunk being your core values, the flowers being your achievement, the thorns being your challenges & struggles, the leaves being your skills, the buds being your opportunities and so on…”, “Can you think for 10 minutes and share the story of your tree?”

This was when we got all of them sitting knee to knee in a close circle. I was privileged to be a part of that circle. The next one hour was one of the most fascinating hours that I have spent – just listening to the stories of these 10 corporate people, entrenched and enmeshed by their daily lives and day-to-day challenges, and yet when each of them spoke, the similarities, the hopes, the challenges and their unique achievements came together so beautifully to form a unique collage.

There was one person who had conquered Mt.Kilimanjaro. He did not look the mountaineering-types. There was another quiet person who donated 25% of his salary every month to charity. His aim in life was to be able to donate 50% at some point. There was another person who had taken breaks from work to be able to sneak across international borders to rescue girl children. There were many jaws that dropped at that moment. Yet another person was an avid off-roader. Atleast two of them cherished dreams of becoming entrepreneurs. One said that the achievement of his life was bringing up two very well behaved children. Many of them had started their careers from very humble beginnings – and were proud of where they had reached. Many spoke about how they want to give back to society, so that many like them would get their chances. A lady spoke about how she just could not lie come what may – another really big man spoke about how he could never ever hurt anyone and how even the thought of having hurt someone unintentionally, makes him lose his sleep. Speaking about their individual journeys, tapping deep into untouched memories, a few of them occasionally choked a bit. When one person wiped his tears, I could see 9 more that were being held back.

We let the conversation go on till there was a natural silence. Yet, it was a very comfortable silence. Somehow in that one hour, the individuals in the group had coalesced into a team. For sure, there would still be a long way to go before they would be a “great” team, but a big chasm had been conquered that day. Figuratively, the members were atleast all holding hands together. There was an invisible bond that now ran through all of them, it was a bond formed by exposing their deepest sides to each other.

The holiest of the Indian scriptures, are the Upanishads. When you break down the etymology of the word, the Sanskrit term upani?ad derives from upa- (nearby), ni- (at the proper place, down) and sad (“sitting down near”).

Truly, there is something holy about sitting around in a close huddle and swapping stories that makes people bond together like nothing else does. You don’t have to take my word for it – try this with your team today, and do let me know how it goes!

8 thoughts on “The Power of a Huddle”